Detail of the Talking Heads’ Remain in Light Back Cover.

Nobody in the architectural domain still regards Contextualism in terms of mimicry or imitation. A good building is not designed by doing like the neighbors do, by keeping up with the Joneses. There is no such thing as contextual authenticity. On the other hand there is little believe anymore in the power of the iconic building. The contextual designer seems to be caught in the paradox of the personal creation of something that is recognized as local and impersonal.
I will not try to rewrite the critique of contextualism in architecture. Rather, what I will try to do is say something about working methods. I will speculate on a ‘knowhow’ of contextualism, much rather than a ‘knowwhy’.

‘Live facts, not fictions’, rock musician and artist David Byrne once said. And his work is an interesting case in point when it comes to the knowhow of contextual architectural design. ‘Anti-individualism’ was a big thing in New York new wave music in the 1980s. The ‘antiindividualism’ or impersonality of his band, Talking Heads, reached its peak on the ‘Remain in Light’ album that was produced in cooperation with Brian Eno. The album was inspired by traditions in African music. Different from much western music, there is no prescribed hierarchy, and diverging perspectives are possible. Music is performed as call-and-response and ‘solo-and-circle’, in which the difference between producer and audience becomes unclear. The music depends on the contribution of all those present, often by the clapping of hands to the rhythm. African music is the product of engagement, whereas western music, with its bias on aesthetic pleasure, traditionally keeps its distance from public participation. Those precise phenomena were challenged in the new wave music of the late 1970s and early 80s, with Byrne and Eno adopting a more intellectual approach.

In the recording of ‘Remain in Light’ Talking Heads were joined by a number of guest musicians who were all familiar with African music. While Byrne and Eno studied musical theory, the different band members explored practically their fascination for African music. Keeping a safe distance from the intellectualism of Byrne and Eno, they were ready to perform, well before the songs had been refined for recording. ‘I didn’t read those books’, bass player Tina Weymouth said. The eventual recording of the album was unorthodox. Byrne did not ask the musicians to rehearse finished and composed songs, but simply asked them to rehearse their skills. The album developed through a process of ‘searching’, recording in layers, editing and erasing them. Literal African references gradually became weaker and weaker. Guitar player Adrian Belew produced scratching rhinoceros-like sounds, which do not relate to any such references. The album contains songs in which different musical lines seem to converge. Lyrics appear to come from isolated voices that are framed in heavy rhythms. They are fragments of facts and messages: ‘Live facts, not fictions’.

Could there be a correspondence in this music to the working methods in architectural design? Could we think of a design not something that is produced by a restricted group of individuals in a limited period of time? Can architecture be a process of ongoing editing of different layers in the design, of the diverging contributions of different people, from solid bass player to front man, from brick layer to project manager and, above all, from designers to end users? Their contributions may sometimes be pragmatic, sometimes aesthetic, sometimes intellectual or ideological in nature. There could be a mix of routine and enthusiasm. I am thinking of a design that can be continuously measured against intellectual and physical objectives and practical possibilities, and above all, one that can be cut free from the vision of a single author. The architect stays in his own territory, the design of architectonic artefacts. The work method may be capable of handling hard knocks. Designs are allowed to show scars. The consistency of the design is not so much a matter of authorship, but of accuracy in the definition of the design task, the dialogue and the editing of the design and production elements. And like in the recording of ‘Remain in Light’, technology is important. The endless dubbing and re-dubbing of the design are made possible by CAD and the Internet. 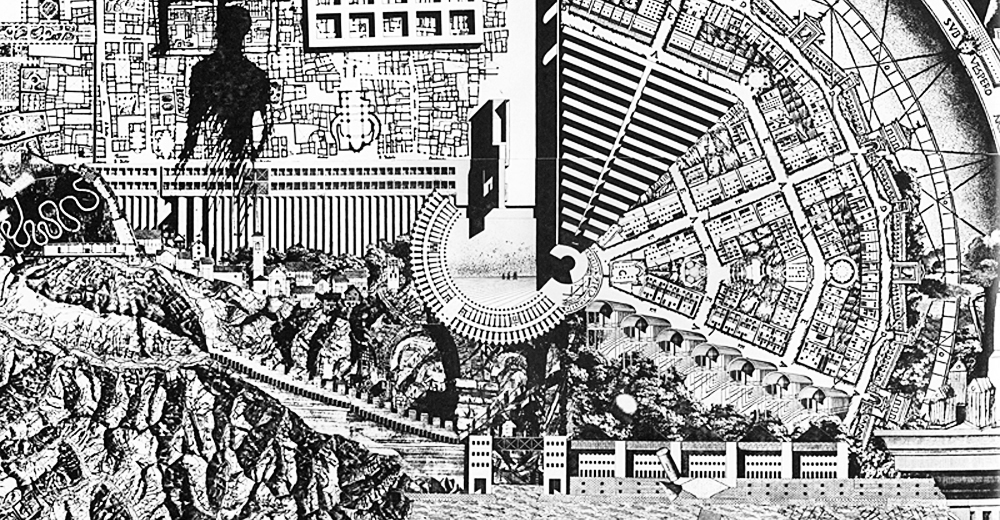 Detail of Città Analoga by A. Rossi, E. Consolascio, B. Reichlin and F. Reinhart, 1976.

In his book ‘How Music works’ David Byrne confirmed such simple facts in the development of music. For instance, the fact that recording techniques have changed, meant that popular music, but also classical opera, was played differently. Also, the type of venue that was at disposal influenced music. Early monophonic music was to be played in big, empty churches that reverberated heavily. By contrast, baroque music was played in smaller rooms with a relatively large audience absorbing the complicated rhythms and chords that were played. In a similar way the thinker Henry Lefebvre taught us that architectural space is never empty. Edifices defy the abstraction of physics such as the vacuum. Architectural space is occupied, filled with things and supplied with codes by its users. It is full of desires, small and large, not always positive in character and sometimes even difficult.

This perhaps sheds light on where the working methods of contextual architecture could go to. After all, buildings are not the self-evident product of regional construction techniques or the availability of locally sourced materials. Everything is possible. Today, a contextual approach of design is a choice, and not an inevitability. This helps to explain how easily contextu alism degenerates into a practice of cultivated artistry and individualism, in which architects take the liberty to ‘read’ the architectural context in their own fashion and subsequently edit that context. Ultimately, even the work of a rationalist architect like Aldo Rossi is consciously subjectified. One could argue that Rossi achieved integration of the physical urban context in a vertical way. Between the context and the design task we find the personal creativity of the designer. The analogue city Rossi got inspiration from was a highly personal reservoir of references. Byrne’s impersonal ‘call-and-response’ working method seems more productive to me, because it can be shared with a wide audience. Call-and-response can be transformed into the design methods of architecture as a horizontal integration of the context in the design. The concept of context is amplified to an intellectual and social environment, in which design stays strictly architectural and the architect plays an old card of the profession: the ability to order complicated tasks and to supply them with comprehensible solutions.

From the “Lecture” at the Bluecoat, Liverpool, 2 May 2013.
Will be published in Street Architecture, a monographic study written by Karin Templin, early 2018.